Cope and drag in Sand Mold :

Cope and Drag are the two parts of the casting flask. Cope is the upper part and drag is the lower part. Even if the casting process is flaskless , the same terms are used for the upper ans lower parts. Generally the flask is made of wood or metal. It contains molding sand. When metal is poured into the mold cavity the flask supports the mold 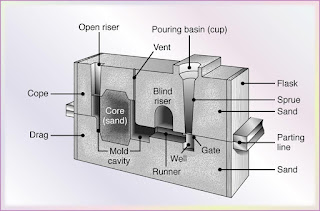 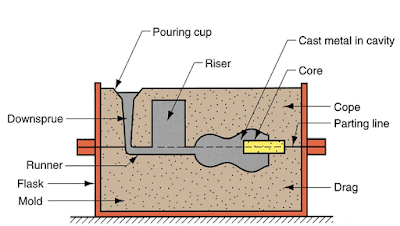 The risers are also known as feed heads. When the metal solidifies it starts to shrink. And then risers comes into play. These feeder supply metals to the cavity when shrinking of the metal starts. 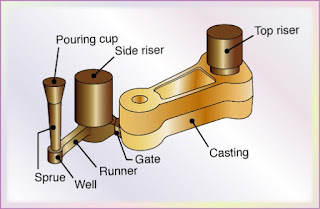 Cores are required to create the castings with holes. It can be made of refractory materials. Most often core sand is used to make it. Metal cores are also available but less frequently used.

Chaplets are the supports for the cores. These are needed particularly when the cores are very big. Usually metal pieces are used to support the core. Without chaplets the core can be displaced and the casting can be spoiled. These chaplets are set-up between the core and mold surface. Caution should be taken while placing chaplets. Clean, oil and moisture free pieces should be used as chaplets.

These are huge metal pieces used to reduce the effect of shrinkage. These increases the thermal conductivity and heat capacity. It helps in speeding up the cooling process. So thick metal parts are cooled quickly. They can be used along with the risers.
Original Source: http://mechanicalinventions.blogspot.com/2016/02/diferent-parts-of-sand-mold-features.html
September 24, 2018 elaine meszaros Categories: