If you provide us with a drawing or 3-D solid model, we can produce a wooden or plastic three-dimensional pattern to be used to create a mold. 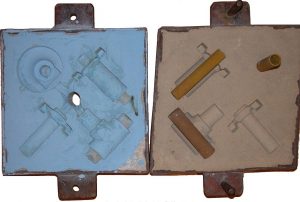 In casting, a pattern is a replica of the object to be cast, used to prepare the cavity into which molten material will be poured during the casting process.[1][2]

Patterns used in sand casting may be made of wood, metal, plastics or other materials. Patterns are made to exacting standards of construction, so that they can last for a reasonable length of time, according to the quality grade of the pattern being built, and so that they will repeatably provide a dimensionally acceptable casting.[3]

The making of patterns, called patternmaking (sometimes styled pattern-making or pattern making), is a skilled trade that is related to the trades of tool and die making and moldmaking, but also often incorporates elements of fine woodworking. Patternmakers (sometimes styled pattern-makers or pattern makers) learn their skills through apprenticeships and trade schools over many years of experience. Although an engineer may help to design the pattern, it is usually a patternmaker who executes the design[4]

Typically, materials used for pattern making are wood, metal or plastics. Wax and Plaster of Paris are also used, but only for specialized applications. Mahogany is the most commonly used material for patterns, primarily because it is soft, light, and easy to work, but also once properly cured it is about as stable as any wood available, not subject to warping or curling. Once the pattern is built the foundry does not want it changing shape. The downside is that it wears out fast, and is prone to moisture attack. Metal patterns are more long lasting, and do not succumb to moisture, but they are heavier and difficult to repair once damaged.[5]

Wax patterns are used in a casting process called investment casting. A combination of paraffin wax, bees wax and carnauba wax is used for this purpose.[5]

Plaster of paris is usually used in making master dies and molds, as it gains hardness quickly, with a lot of flexibility when in the setting stage.[5]