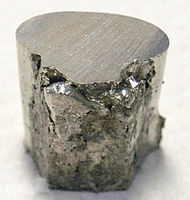 Nickel is a chemical element with symbol Ni and atomic number 28. It is a silvery-white lustrous metal with a slight golden tinge. Nickel belongs to the transition metalsand is hard and ductile. Pure nickel, powdered to maximize the reactive surface area, shows a significant chemical activity, but larger pieces are slow to react with air under standard conditions because an oxide layer forms on the surface and prevents further corrosion (passivation). Even so, pure native nickel is found in Earth’s crust only in tiny amounts, usually in ultramafic rocks,[4][5] and in the interiors of larger nickel–iron meteorites that were not exposed to oxygen when outside Earth’s atmosphere.

Meteoric nickel is found in combination with iron, a reflection of the origin of those elements as major end products of supernova nucleosynthesis. An iron–nickel mixture is thought to compose Earth’s inner core.[6]

Use of nickel (as a natural meteoric nickel–iron alloy) has been traced as far back as 3500 BCE. Nickel was first isolated and classified as a chemical element in 1751 by Axel Fredrik Cronstedt, who initially mistook the ore for a copper mineral, in the cobalt mines of Los, Hälsingland, Sweden. The element’s name comes from a mischievous sprite of German miner mythology, Nickel (similar to Old Nick), that personified the fact that copper-nickel ores resisted refinement into copper. An economically important source of nickel is the iron ore limonite, which often contains 1–2% nickel. Nickel’s other important ore minerals include garnierite, and pentlandite. Major production sites include the Sudbury region in Canada (which is thought to be of meteoric origin), New Caledonia in the Pacific, and Norilsk in Russia.

Nickel is slowly oxidized by air at room temperature and is considered corrosion-resistant. Historically, it has been used for plating iron and brass, coating chemistry equipment, and manufacturing certain alloys that retain a high silvery polish, such as German silver. About 9% of world nickel production is still used for corrosion-resistant nickel plating. Nickel-plated objects sometimes provoke nickel allergy. Nickel has been widely used in coins, though its rising price has led to some replacement with cheaper metals in recent years.

Nickel is one of four elements (the others are iron, cobalt, and gadolinium)[7] that are ferromagnetic at approximately room temperature. Alnico permanent magnets based partly on nickel are of intermediate strength between iron-based permanent magnets and rare-earth magnets. The metal is valuable in modern times chiefly in alloys; about 68% of world production is used in stainless steel. A further 10% is used for nickel-based and copper-based alloys, 7% for alloy steels, 3% in foundries, 9% in plating and 4% in other applications, including the fast-growing battery sector.[8] As a compound, nickel has a number of niche chemical manufacturing uses, such as a catalyst for hydrogenation, cathodes for batteries, pigments and metal surface treatments.[9] Nickel is an essential nutrient for some microorganisms and plants that have enzymes with nickel as an active site.

The global production of nickel is presently used as follows: 68% in stainless steel; 10% in nonferrous alloys; 9% in electroplating; 7% in alloy steel; 3% in foundries; and 4% other uses (including batteries).[8]

Nickel is used in many specific and recognizable industrial and consumer products, including stainless steel, alnico magnets, coinage, rechargeable batteries, electric guitar strings, microphone capsules, plating on plumbing fixtures,[66] and special alloys such as permalloy, elinvar, and invar. It is used for plating and as a green tint in glass. Nickel is preeminently an alloy metal, and its chief use is in nickel steels and nickel cast irons, in which it typically increases the tensile strength, toughness, and elastic limit. It is widely used in many other alloys, including nickel brasses and bronzes and alloys with copper, chromium, aluminium, lead, cobalt, silver, and gold (Inconel, Incoloy, Monel, Nimonic).

ecause it is resistant to corrosion, nickel was occasionally used as a substitute for decorative silver. Nickel was also occasionally used in some countries after 1859 as a cheap coinage metal (see above), but in the later years of the 20th century was replaced by cheaper stainless steel (i.e., iron) alloys, except in the United States and Canada.

Nickel is an excellent alloying agent for certain precious metals and is used in the fire assay as a collector of platinum group elements (PGE). As such, nickel is capable of fully collecting all 6 PGE elements from ores, and of partially collecting gold. High-throughput nickel mines may also engage in PGE recovery (primarily platinum and palladium); examples are Norilsk in Russia and the Sudbury Basin in Canada.

Nickel and its alloys are frequently used as catalysts for hydrogenation reactions. Raney nickel, a finely divided nickel-aluminium alloy, is one common form, though related catalysts are also used, including Raney-type catalysts.

Nickel is a naturally magnetostrictive material, meaning that, in the presence of a magnetic field, the material undergoes a small change in length.[70][71] The magnetostriction of nickel is on the order of 50 ppm and is negative, indicating that it contracts.

Nickel is used as a binder in the cemented tungsten carbide or hardmetal industry and used in proportions of 6% to 12% by weight. Nickel makes the tungsten carbide magnetic and adds corrosion-resistance to the cemented parts, although the hardness is less than those with a cobalt binder.[72]

63
Ni, with its half-life of 100.1 years, is useful in krytron devices as a beta particle (high-speed electron) emitter to make ionization by the keep-alive electrode more reliable.[73]

Around 27% of all nickel production is destined for engineering, 10% for building and construction, 14% for tubular products, 20% for metal goods, 14% for transport, 11% for electronic goods, and 5% for other uses.[8]