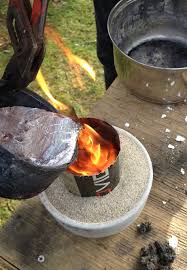 Steel is a widely used material in most industrial applications despite the increasing use of nonferrous alloys, composites and polymers. Although the lost foam casting method can produce steel parts, the process has not yet been adopted in the industry. However, lost foam casting could provide significant benefits for the production of steel castings.

Some manufacturers have adopted lost foam technology for the casting of gray and ductile irons to take advantage of improved as-cast dimensional tolerances that in some cases are equal to investment casting. Tolerances of 0.005 in. (0.127 mm) for the first inch (25.4 mm) and 0.003 in. (0.0762 mm) per 1 in. (25.4 mm) thereafter are expected for castings produced from molded foams. Tolerances up to 0.002 in. (0.051 mm) per 1 in. (25.4 mm) are possible from CNC machined foams, which are used for small batches, replacement parts, or prototypes.

Other benefits of lost foam casting include part consolidation, which allows for the elimination of fasteners, welding and other joining technologies and an improved capability for casting channels and other complex shapes. The elimination of processes allows for a leaner supply chain with reduced shipping and less inventory. With proper system design, castings produced via lost foam creates significant opportunities for cost savings.

In order to cast steel via the lost foam process, a number of technical innovations were necessary. The primary developments over the past few years that have enabled steel to be cast using lost foam are in the coating and foam pattern material. A thorough understanding of gating, fluidized bed, fluid flow, steel metallurgy and heat transfer phenomena is also necessary in order to obtain quality castings.

The foam used in lost foam casting requires a special bead, and the type of foam bead needed for specifically steel had additional requirements due to the process demands. The most common foam for lost foam is expanded polystyrene (EPS) due to its low cost and widespread availability. It is usually molded at a density of 1.2-1.5 lb./cu.ft (0.02-0.03 g/cu.cm). More recently, the use of expanded polymethyl methacrylate (PMMA) beads have led to reduced carbon pickup. It also reduces carbon defects such as lustrous carbon, which occurs when liquefied polymer is trapped between the metal and coating, causing a carbon film on the casting surface.

Newly designed pattern bead materials specially made for irons and steel are now available. One example of this is a blend of 30% EPS and 70% PMMA, formulated to minimize the carbon available for pickup. This is accomplished by creating foam polymers containing atoms that, upon vaporization, are thermodynamically predisposed to joining with the carbon. Thus, the carbon is no longer available for pickup into the molten metal itself. The compounds that form are non-degrading to the cast steel or cast iron alloy.

Coatings for lost foam patterns are critical and have been studied in depth. The coating controls the removal of the vaporized foam gas from the mold. It has been determined that the coating thickness affects the mold fill time. Improper coating will result in burn-in sand, mold wall collapse, or a back pressure of gas that can cause molten metal to explode out of the sprue. The new coatings on the market are designed for the higher pour temperature of steel and iron as compared to aluminum. It is important to have strict adherence to the process control parameters that are developed for the process.

As is typical in lost foam casting, the coating properties, foam material, and fluidized bed compaction details are significant parameters to control. In addition, the gating system is critical to prevent mold wall collapse and control fluid flow. However, the most significant parameter is the pour temperature. This is controlled by having a higher than normal superheat of at least 2,900F (1,590C) and pouring speeds of at least 80 lbs. (36.3 kg) per second, and preferably 100 lbs. (45.4 kg) per second. Further discussions of the actual process parameters will be covered in future papers.

A large gear replacement part for a steel rolling mill was made using SAE 1060 plain carbon steel. The gear weighed 120 lbs. (54.4 kg) and was 15 in. (381 mm) in diameter and 4 in. (102 mm) thick. This gear was cast in lost foam primarily to reduce the lead-time, but it also benefited from eliminating most of the machining. In this case, the only machining required was to remove 0.001 in. (0.025 mm) from the center hole in to fit the gear onto the shaft. The lead time was reduced by nine weeks, and the component was 20% cheaper than alternative processing technologies considered, including machining from steel stock and creating a custom green sand casting followed by machining.

Figure 3 shows the foam for the SAE 1060 gear. No die was used to manufacture the foam because this was a replacement part. Rather, the foam was itself machined from stock foam, which means that the surface finish depended on the quality of the foam machining. Figure 4 shows the gear after shot blasting with S550 grit blast media. The gear teeth show the as-cast surface quality of the teeth matches the surface roughness of the foam pattern.

ASTM A743 grade CF8M stainless steel (316 SS) also has been cast successfully using the lost foam casting method. In one example, the component was designed for use in a corrosive environment to control fluid flow. Originally, this component was gray iron and lasted in situ 1 hour in an acid environment. The part was converted from gray iron to CF8M stainless (316 SS) to improve the component life. Only 0.04 in. (1.02 mm) was machined on the face of the part in order to produce a seal, and the part lasted more than four months. This component was cast via lost foam because most other metal casting processes would not be able to obtain the necessary part geometry at the price required. In addition, the elimination of most machining is important as CF8M stainless (316 SS) is somewhat difficult to machine.

Figure 5 shows the foam pattern and Fig. 6 shows the as-cast component after shot blasting. In this case, the foam was “blown” in a process similar to injection molding. Again, the surface finish matches that of the foam and depends on the quality of the foam beading.

Figures 7 and 8 show the resulting microstructure of the ASTM A743 grade CF8M (316 SS) component at 200X and 400X. Again, this as-cast microstructure appears consistent throughout and typical of this grade of steel. Table 2 lists the chemistry results that are also in the standard range for CF8M stainless steel (316 SS).

As a final example, a casting was successfully produced in ASTM A743 grade CF8 stainless steel (304 SS). The use of this component is confidential. Figure 9 shows the surface finish after shot blasting to remove the refractory coating. The roughness matched the foam pattern, as this component was a prototype and cast from machined foam. Figures 10 and 11 show the as-cast microstructure at 200X and 400X. Table 3 shows the chemistry of the casting, which is within normal ranges. Again, the microstructure was uniform throughout with no evidence of carbon variation or pickup. The microstructure also is the same as standard ASTM A743 grade CF8 stainless (304 SS) cast by other metal casting techniques.

Seven stainless steel heats were analyzed for carbon before pouring and in the solidified castings. This allowed a determination of carbon pick-up from the process. The average carbon pickup in the process was 0.053% with a standard deviation of 0.0275%. Heats 6 and 7 had the lowest amounts of carbon at 0.032% and 0.034%.

Future Potential
Steel in lost foam is just beginning commercialization, but it has a strong potential for widespread adoption as a technology due to the cost saving benefits that the technology allows. Lost foam casting has advanced to the point that the casting of plain carbon and stainless steel is currently possible. It is used at three companies in the U.S. so far, and research reports indicate its use in a variety of other countries. The majority of it is used in captive applications.

For low carbon steels (less than 0.03%), more work needs to be performed to better predict the carbon pick-up in the castings. The grains of the stainless steel parts need to be smaller and refined to reduce the grain boundary inclusions. There needs to be more research performed to understand the minimum thickness steel castings can be cast in the lost foam process and if this thickness is alloy dependent.

Chemistry analysis and metallography of the steel castings via lost foam reveals little carbon pick up or degradation of microstructural properties. Based on the microstructural examination, it is expected that the mechanical and other material properties are the same as steel castings produced via other metal casting techniques. However, additional testing is necessary to confirm this.